GALVESTON, Tex.: I don’t remember what prompted me, on our slog along I-10 from San Antonio, to propose to Sandy that we make a detour south to see Galveston. I recalled reading about traffic nightmares of driving through Houston at rush hour, which is when we would arrive there. Galveston seemed like an exotic sideshow. With no knowledge of the city, we looked up “Airbnb.com” and after some indecision, found a place, described as a “cute” one-bedroom bungalow in the backyard of a large home, only three blocks from the beach for $49, plus service charge plus tax plus cleaning fee. The catch: you had to go into the main house to use the bathroom.

We couldn’t find a better deal for three blocks from the beach, so we went with it. Not bad, we thought, for a spur-of-the-moment decision, and our first-ever Airbnb rental.

From I-10 during rush hour, Galveston isn’t an easy destination. We ground our way along the traffic-choked Sam Houston Tollway, then shifted to I-45 to fight more traffic across the causeway over West Bay, which feeds into Galveston Bay. We found the bungalow, comfortable, as promised, although the bathroom, like the room itself, required a punch-in combination code.

It was nearly dark when we arrived, but we were car-cramped and hungry, so we straggled towards the beach highway, Seawall Blvd.  Galveston is flat and hot and muggy in September, even after dark. Sweating, we looked for a restaurant we found online. It was inside the humongous, old-world style Hotel Galveston and Spa, which squats astride the beach highway. Pricey and ostentatious. Wearing tee-shirts and shorts, we moved on, but saw nothing except fast-moving traffic. We asked a woman at a beach shop about restaurants. She directed us, enthusiastically, to Mario’s, which “has everything—seafood, steaks, everything. Plus it’s across the street from my house, so I go there all the time,” she smiled.

Mario’s was on 7th Avenue. We were on 21st.   We trudged on few more blocks, gasping for air, then spied a Denny’s and gave up on Mario’s.

The room was okay, except that the air-conditioner, fixed in a window above the bed, was set on high-cold blast, and could not be adjusted. I pulled on a second shirt and wool pajamas and settled in with my head beneath the quilt. Getting up at night and walking outside to use the bathroom in another building, and trying to remember a combination to unlock the door, is no fun, either.

One big plus: the house had a washer and dryer. We got up early and tossed our stuff in the washer, then set out one last time to see something of the place. At 7:00 AM it already was hot. We strolled the Gulf beach between jetties. Tiny Gulf-type waves lapped the shoreline. On the horizon, a dozen or more giant oil tankers, the lifeblood of the local economy, sat waiting to unload. 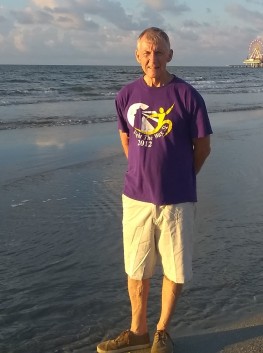 Unlike other beaches we’ve seen in the early morning hours, this one was deserted. No one else strolled by to wave good morning. A half-dozen blocks from our street loomed Galveston’s giant “Historic Pleasure Pier,” which houses all sorts of the typical beach amusements. We kept walking, looking for something worth the walk, but gave up a few blocks on. 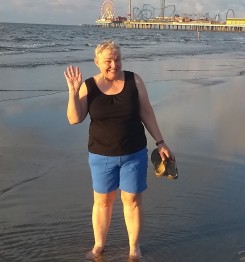 Walking back, we inspected the local housing. The streets were lined with frame homes, some under renovation, others badly in need of it, some painted in garish purples and yellows, some chipped and peeling and collapsing. The neighborhood impressed us as Jersey Shore wannabe, mixed with some mocked-up low-rent French Quarter style.  Oh well. To be fair, we didn’t see what’s said to be the beautiful end of the city. But by mid-morning we weren’t in the mood for touring. We dried our laundry, waited out rush hour, and said goodbye to Galveston.

View all posts by ontheroad49